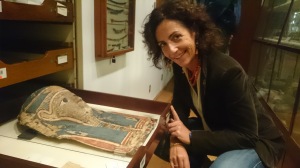 Checking potential samples for the project with Alice Stevenson (Petrie Museum-UCL) and Kathryn Piquette (UCL) at the Petrie Museum, London.

As the readers of my blog know, I have been following the amazing adventures of Scott Carroll, former director of the Green collection and now partner of Ancient Asset Investments, and his friends dissolving Ptolemaic and early Roman mummy masks in Palmolive soap with the strange idea to retrieve New Testament manuscripts, but in fact finding some administrative Ptolemaic documents and Greek literary fragments as a result of their washing up. We will possibly have more precise information about what was inside the artefacts when the first volume of the Green papyri will be published, with the hope to receive also explanations on the methods employed for the dismounting, and on the provenance of the masks and cartonnage, especially after we learnt that Iraq clay tablets from the Green collection have been seized and are under investigation by the federal authorities.

As it often happens in research, some good came as a result of what happened. Public concern raised by the Palmolive Indiana Jones YouTube exploits has pulled together a multidisciplinary team of specialists lead by Melissa Terras (UCL) and Mike Toth (R.B. Toth Associates), including myself among others, that has received funds from Arcadia Foundation to investigate how special imaging techniques, such as multispectral technology, can lead to the establishment of non invasive methods for reading papyri encapsulated in mummy masks and other cartonnage objects. We named the project Making the Mummies Talk. 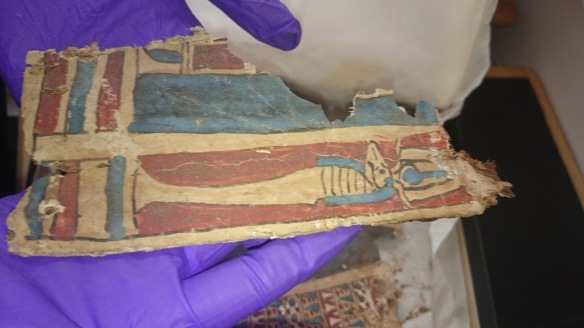 Sorting out cartonnage samples at the Petrie Museum

The work of the team has just begun. There are a number of challenges we are facing, ranging from conservation issues to the little information available so far on the compositions of ancient inks and how they respond to the different imaging techniques we are going to apply. But we are convinced that the project will be a decisive step forward into finding ways not only to avoid the destruction of ancient artefacts in the future, but also to gather data on their material features and freely share them for study. Classicists and other specialists have tended too often to focus only on the texts written on ancient papyri and other materials, overlooking other key aspects of ancient manuscripts, such as the quality of the papyrus employed, ink compositions and other means involved in their production, and their multiple lives as books or documents first, and later as recycled materials for the fabrication of something different.

This project will also allow us to evaluate what impacts past conservation techniques used in museums and libraries, or by dealers, had on the objects under study. While working with Mike Toth at the John Rylands Library, for example, we obtained some interesting information on the tax receipt on the back of the so-called Last Supper Rylands amulet: besides the text of the receipt otherwise unreadable, multispectral imaging brought to light traces of cell-tape unfortunately employed in the past on the papyrus surface, the effects of which were, however, invisible to the naked eye.

P.Ryl.Greek Add. 1166 back: the lighter stripes visible especially on the left half of the papyrus match with cell tape that was found in an envelope with the papyrus. Images were taken before conservation.

3 thoughts on “Making the Mummies Talk (without Palmolive soap!)”