“I figured about 65 classical texts…”Dr. Scott Carroll in Mexico, September 2013

As the readers of my blog know, I am a big fan of Dr Scott Carroll, formerly on the payroll of the Green Collection (2009-2012) and recently collaborating with the evangelical apologist Josh McDowell, as you can read in a recent post of Brice C. Jones. I am fascinated by this Indiana Jones of Biblical Studies, as I have explained in an old post, and desperate to meet him in person.

At the moment, I am just following his adventures on the web. I know that a meeting with him would be an amazing experience, as I understand while watching the faces of people gathering en masse for his talks in the videos I am now religiously collecting for my amusement.

However, I found this particular video of an event organised by the University of the Nations for a workshop in Mexico last September 2013 a bit concerning. Here Scott, after having explained what his and his wife’s organisation (I guess the Scott Carroll Manuscripts & Rare Books and The Manuscript Research Group) do, starts moving around what do seem glazed papyrus fragments and other artefacts. Then he addresses the fascinating topic of papyri from mummy cartonnage. He jokes about the smell of mummy cartonnage over the house stove to the despair of his wife, and alludes to the scams you may find on eBay looking for cartonnage. Finally, he explains how to extract papyrus fragments from mummy cartonnage showing images from his computer. He says that the procedure he shows through what seems to be powerpoint slides – that you can see in the screen shots I took from min. 24:40 onwards in the video (see below), but I really recommend to watch the video itself – was performed at Baylor University (Texas) where, he asserts, he had an appointment. Unless he is lying, which I cannot believe because he is a good Christian, he must refer to the days when he was working for the Green Collection and the Green Scholars Initiative, since Baylor University has been collaborating with both at least from September 2011. In fact, an event lead by Scott Carroll consisting into the dismounting of a mummy mask for obtaining papyri took place at Baylor University and involved professors and students of the Department of Classics on September 9, 2011, as reported in the Bulletin of the Department (pp. 1-2).

Can you help me tracking down this Indiana Jones of Biblical Studies for an interview (and a picture with autograph, obviously)? Can you add details, corrections or integration to the information retrieved so far? Were you part of the public for any of these scholarly or wider audience events? I’d love to hear from you… 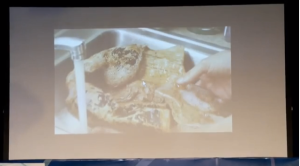 13 thoughts on “Papyri retrieved from mummy cartonnage: a video”