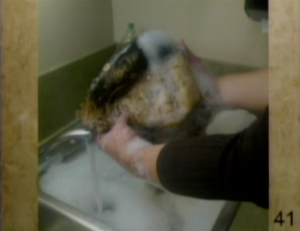 Washing mummy masks with Palmolive soap? Josh McDowell’s powerpoint slides on how to dismount mummy masks (screenshot from the video)

In a freshly published blog post, Brice C. Jones comments on a freely available video where the American evangelical Christian apologist Josh McDowell shows slides attesting the dismounting of mummy cartonnage for retrieving papyri. There are many questions we would like Josh McDowell and the scholars collaborating to his project Discover the Evidence (Daniel B. Wallace of Dallas Theological Seminary, for instance, and Scott Carroll who are listed in the Discover the Evidence webpage as “Event Speakers”) to answer to the public: where do these mummy masks come from? Where did the dismounting process take place? Who are the other unnamed scholars mentioned in the course of the talk as taking part to these most extraordinary discoveries?

On the webpage dedicated to Discover the Evidence we read that the event took place on 5-6 December 2013. A month later two of the event guests, Scott Carroll and Christian Wiedener, are reported to have performed some scanning on an Egyptian mummy mask of the 2nd century BC at South Dakota State University on the website of the University Foundation. The mask is said to belong to a private owner. According to the press release,

“Carroll will return the mask to its owner along with the report about where the texts are located. Then the decision will be made about when and how to remove the texts—either surgically or through different types of washes, he explained. Carroll’s research group retains the right to publish the texts they find. Their experts work with professors and their students to document their findings. “Our discoveries bring enormous value to the owner,” Carroll added.”

This is for sure, what I doubt about is that their discovery will bring any value to serious research as long as nothing has been published. Not to mention the many questions we have already posed on the provenance and acquisition circumstances of all these mummy masks and panels suddenly surfacing from nowhere.

6 May 2014 Update: Daniel B. Wallace comments on his participation to Josh McDowell’s Discover the Evidence in his blog: http://danielbwallace.com/2014/05/06/josh-mcdowells-discover-the-evidence/

On the belonging of some of the items in the powerpoint slides to the Green Collection/Museum of the Bible see this thread on the Evangelical Textual Criticism blog: http://evangelicaltextualcriticism.blogspot.co.uk/2014/05/breaking-news-first-century-fragment-of.html