There is a proverb in the Veneto region of Italy, which says that if your right eye has a spasm (actually it says ‘dances’) then you will have troubles in love. If the left eye does the same, you will be heartbroken. Knowing it or not, Veneto-Italians are continuing an ancient divination technique called ‘palmomancy’, the interpretation of the involuntary spasms or twitching of the human body. In the Graeco-Roman world, professional diviners and magicians gave body-based predictions of the future to their clients on the basis of manuals and centuries of experience. This field of knowledge is hard to be defined according to modern categories of religion, magic and medicine, since it often shares features with each of them.

Not many manuals of palmomancy have survived from antiquity, but we do have a fine one in Manchester: P. Ryl. I 28. The Rylands treatise occupies a very special position in the history of such literature, because it is one of the earliest, and one of very few extant copies, and because it was fabricated as a small codex, measuring about 7.5 x 6.6 cm. P. Ryl. I 28 was classified by E. Turner in his ‘group 11’ of codices (‘miniature codices’), a definition that has since been applied to early codices measuring less than 10 cm. Another intriguing feature of Ryl. I 28 is its handwriting, which can be classified as a sample of the so-called ‘Biblical majuscule’, a writing canon that developed from the second to the ninth century AD and was especially but not exclusively adopted for Biblical manuscripts. Dating to the fourth century AD, our papyrus is another proof of how misleading is to separate neatly the interests, readings and writings of people living in late antiquity.

I am conducting some research on this piece as part of my pilot project on the Rylands papyri for the John Rylands Research Institute, with the help of two of the Library conservators, Timothy Higson and Caroline Checkley-Scott, and this week also of one of my most recent MA students, Chris, who wrote a successful dissertation on this papyrus.

Among the many issues we will address, the central one concerns the fabrication of the booklet. I am convinced that the clarification of this point may help us to understand something more about the small book’s history and that of its ancient owner.

My first research question is whether we possess the entire book or if some pages went missing. As it stands, the manuscript is composed of four papyrus sheets, each bearing 4 pages (2 on each side). This became at some point the standard for the fabrication of codices: the group of four sheets (=16 pages) was called quaternio (‘set of four’) in Latin, and later became ‘quire’ in English. The four sheets were put one on top of the other, folded and then stitched together. 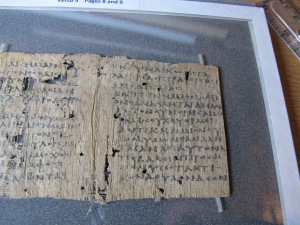 Detail of the thread’s remains
© The John Rylands Library

P Ryl. I 28 is exceptionally interesting because remains of the binding thread are still in place. It is here that Caroline Checkley-Scott, a renowned expert in bookbinding, is helping me to solve a problem. Palmomancy treatises follow a very schematic pattern: they describe twitches and their significance from top to bottom, i.e. from the head to the feet. Our treatise, however, starts with the abdomen, and ends with the toes. In other words, it seems to consider only the lower half of the body, which led me to suspect that at least another quire of the original codex is missing. The analysis of the threads and little holes on some pages seems to confirm this hypothesis, but more experiments and analysis are due in order to prove the point. Caroline has also noticed that on the sheet that constituted the middle of the quire there are traces of a piece of material, maybe a strip of papyrus or leather, probably inserted to protect and reinforce the binding. We have also some ideas on the rounded form of the page edges. More experiments, multispectral imaging, and some laboratory analysis will help us testing our hypotheses.

For now, I leave you on a funny note. P Ryl. I 28 was first published in 1911 by A.S. Hunt, the famous papyrologist from Oxford who formed a formidable pair with his friend and colleague B.P. Grenfell. Hunt avoided translating the sections of the Rylands treatise describing the twitching of private body parts like the one alluded to in the title of this post, which runs as follows:

‘If the anus, that some also call ‘ring’, twitches, it shows inspections, abuses, and the discovery of secret matters’.

Avoiding words linked to sexuality and other bodily functions was typical of late Victorian morality, and very far from Greek and Roman direct attitudes to the human body. However, we have been recently amused by the discovery of a naughty photograph of a beautiful naked woman stitched into a page of B.P. Grenfell’s paper archive in Oxford (reported by Viceandvirtueblog). It seems the scholar was interested in human bodies after all. So beware, scholars! Other scholars will later investigate your files and will notice inconsistencies in your behaviour: consider burning after reading…

Further reading: the best edition and discussion of Greek palmomancy treatises is available in Italian, S. Costanza, Corpus Palmomanticum Graecum, Florence 2009. On divination in antiquity I like Sarah Iles Johnston, Ancient Greek Divination. Blackwell Ancient Religions, Oxford 2008; on the development of the codex as a book form,  E.G. Turner, The Typology of the Early Codex, Philadelphia 1977; sensible warnings on the category of ‘miniature codex’ have been recently made by T.J. Kraus, ‘P.Oxy. V 840 – Amulett or Miniature Codex? Principal and Additional Remarks on Two Terms’, in Id., Ad Fontes: Original Manuscripts and Their Significance for the Studying Early Christianity, Leiden 2007.

Musings on Daily Life in the Ancient and Early Medieval Mediterranean By Sarah E. Bond (@SarahEBond)