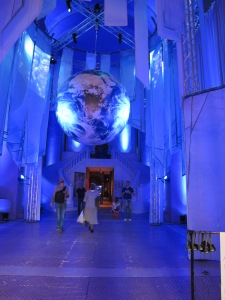 The entrance to Verbum Domini II

I spent Easter with family in Italy and took a train to Rome for visiting a very interesting exhibition, Verbum Domini II, organized by the Museum of the Bible, the organization in charge of the traveling exhibitions of biblical artifacts in The Green Collection. About 200 items related to the history of the Bible are on display in the Braccio di Carlo Magno in Vatican City until next June 22. The exhibition is free, which is understandable since the mission of Mr. Green is that of bringing the Word of God to the world. Objects range from fragments of the Dead Sea Scrolls to the Complete Lunar Bible, a microfilm in gold frame that went on the moon on Apollo 14. In eleven sections, the exhibition informs the visitor on the media, languages, and ways through which the Bible was transmitted to the people all over the world from the moment it was recorded. A catalogue co-authored by Jennifer Atwood, Rory P. Crowley, Jonathan Kickpatrick and David Trobisch, offers a detailed analysis of the pieces on display according to the different sections, from the Jewish and Greek roots of the Bible to the mission on the moon, with nice images.

Very few pieces on display are borrowed from museums or libraries, mainly but not exclusively the Vatican collections; the vast majority of them belong to the Green Collection. It is impressive to visualize the size and richness of this recently formed private collection. From what I have understood through the web, Mr. Green has been able to buy about 40,000 items related to the history of the Bible in few years (2009-2012) and I imagine acquisitions are still on going.

The history recounted through the showcases is a triumphal one. The Bible travelled fast in the context of the Roman Empire, and beyond, surviving the contraction of alphabetization of the Middle Ages. Later on translations in vernacular and national languages, and the development of printing technologies, increased the opportunities for the Book to be known worldwide. Bibles for children and abridged versions of biblical narratives improved alphabetization in the Word of God; at the same time the Bible was often the schoolbook for people to learn to write and read. Despite the variety of texts and artifacts assembled, and the narrative developed through them, I believe that in fact the history of the Bible is much more interesting and multifaceted than that narrated by Verbum Domini II. For example, alternative books or versions of the Bible have been written by minority or less powerful groups from antiquity onwards. The Bible has been interpreted, shaped, written, re-rewritten and transmitted in various, and often contrasting ways. As Egyptian papyrus and parchment findings from the end of the 19th century onwards have shown us, Jesus’s followers recorded different stories, and organized themselves around different traditions, beliefs, rites and writings. The amount of Christian literature related with the canonical, Biblical literature is much wider than that presented in this exhibition. The Green narrative is also sanitized from violence, except when exercised against Christian missionaries. An interesting section is devoted to the killing in Ecuador of five American evangelical missionaries who went to spread the Word of God among the Huaroni in 1953, the so-called Operation Auca covered by a famous photography reportage on Life magazine. This episode has had a great influence on Christian evangelical missionary ideology and practices. One of the Green companies, Every Time Entertainment, has released two films on it: the documentary Beyond the Gates of Splendor, and the adventure movie End of the Spear.

However nothing is said, for instance, of the violence exercised by Christian missionaries in South America (just to remain in the area), or the distorted, instrumental and discriminatory reading and uses of the Bible made by monarchies and dictatorships in the course of history. It is understandable that an organization with a Christian evangelical mission, and the Vatican, which is so much part of this story, read and present the history of the Bible in this way. As Steve Green explains talking about his family and the items in their collection in an interview (Les Enluminures, Autumn 2013, p.32): “We are storytellers first, and these items tell a story…We’re buyers of items to tell the story. We pass on more than we buy because it doesn’t fit what we are trying to tell.” I understand you need to operate choices when you collect, and I believe that everybody is free to tell his version of the story of the Bible. Nonetheless as an ancient historian I am not fully convinced that what I have seen in Vatican City is a balanced, historical-critical analysis of the history of the Bible, and more broadly of Christianity. I do think that Christian (and non Christian) audiences (and collectors, scholars, etc.) have no reason to be frightened by their complicated, fascinating history, ‘heretical’ and violent sides included.

Since my interest in papyrology, I focused my attention especially on the first sections, which contain spectacular pieces. A leaf from the Codex Vaticanus, on loan from the Biblioteca Apostolica Vaticana, offers the visitor the rare opportunity to take a close look to one of the two most ancient complete copies of the Bible in Greek (the other is the Codex Sinaiticus, in the British Library). A facsimile of the entire codex gives an idea of its ancient shape. There are also some Bodmer papyri. P. Bodmer XIV (P75), also on loan from the Biblioteca Apostolica Vaticana, bears the end of the Gospel of John and the beginning of Luke. This papyrus, together with Bodmer XV, was presented to Pope Benedict XVI by the American magnate Frank J. Hanna II in 2007, after the Bodmer Foundation sold it not without critics from the scholarly community. Thanks to this exhibition, I have learnt that the Green Collection has bought some Bodmer papyri too. On display there are five leaves of P. Bodmer XXIV, a Psalter dated to the 3rd-4th century AD, formerly in Geneva and now part of the Green Collection (GC.MS.000170.4-8, Catalogue pp. 19-21). The purchase must have taken place before 29 February 2012, because I retrieved on the web an interesting article and an image of Scott Carroll, former director of the Green Collection, with what seems to be a glazed page of the Word of God in its Bodmer version. Another ancient manuscript the Greens have been able to secure recently for Oklahoma City, later to be moved to Washington, is the famous Codex Climaci Rescriptus, on display with an iPad showing the fantastic results they obtained with multispectral imaging and computer technologies.

So far the exhibition’s superstar pieces. But I must confess that the fragment which attracted my attention mostly is number 28 in the catalogue (GC.MS.000462, p. 42 with figure 26). This is a humbler papyrus fragment from a codex page containing lines from Galatians 2 in Sahidic Coptic. The label reports that the item dates to the 5th-6th century AD and is undergoing research with the Green Scholar Initiative (as most of the items in the exhibition). I remembered this piece well, because it was noticed by Brice C. Jones among those put on sale on eBay from a Turkish account (MixAntik) in October 2012. At that time, Brice wrote a post about it on his blog, and there were reactions from people alerting on the legal issues concerning this selling. Dorothy L. King has also written on this and other fragments posted on eBay by MixAntik in her blog more than once. I have contacted Brice, who is going to write on this bit of the story in his blog soon.

In sum, I really recommend a visit to Verbum Domini II: it is exciting to see assembled together items not so easily accessible to the general public, and I do encourage all of you to go and make discoveries as interesting as mine. Certainly some questions are waiting for public answers at this point: Did the Greens buy GC.MS.000462 directly from the eBay Turkish seller MixAntik or whatever it is called? If not, who did sell it to them? Can we be informed about the terms of this purchase, since there were legal questions posed at that time? As Steve Green explains in the abovementioned interview (p. 36) “A person has a better understanding of the artifact the more they [sic] know about its story …”: I am sure that the Museum he is sponsoring in Washington D.C. will inform visitors on the ancient and the modern story, including acquisition circumstances, of each artifact. Waiting for the opening, I would be grateful for now just to be told from where GC.MS.000462 comes from.