Would you like to see plenty of “Biblical” antiquities of unknown provenance including some forgeries too? Then download the two pdf brochures that a Mr Brandon Witt is circulating to institutions and individuals for sale (the second version seems to imply that some items have been indeed sold).

Many of the pieces seem related with Scott Carroll and other evangelical dealers/collectors/morons. Cuneiform tablets, the usual Ptolemaic papyrus from cartonnage, a post-2002 Dead Sea scroll fragment and late antique parchments. Real, forgeries or replicas? Who knows? Only Torah scrolls seem missing from the cabinet of curiosities, probably none has been left after Hobby Lobby and later Ken and Barbara Larson swept the market.

I sent an email to Mr Witt to fix a call and listen at the story of how he came in the possession of this remarkable assortment, but he says he has “a couple other big deals” which are taking up a lot of his time – frightening, as I can’t imagine what else he is trying to sell.

To me it is a mystery why American evangelicals seem entitled to sell their unprovenanced and forged Biblical trinkets without any consequences.

I had thought to speak about the past at next week conference on The Market for Biblical Antiquities (1852-2022), but then the present is so remarkable I will have to discuss it, too…

Details on how to participate here:

Ancient Asset Investment website today: down for maintenance.
It is saved, however, on archive.org. Just click on this link.

In his blog, Paul Barford has recently called attention to the “dedication events” listed in the Ancient Asset Investment webpage on “Gifting”. I report here what I have found so far through the web on the basis of that list, some of Barford’s notes, and new evidence. All the donations linked with Ancient Asset Investment and Scott Carroll I have been able to track down have the sponsors in common: Ken and Barbara Larson.

1) 31 March 2014, Bethel University, St Paul Minnesota. Dedication of a Torah donated by Ken and Barbara Larson. The Torah, about 89 feet long, is said to come from Baghdad and dates predominantly to the early 17th century, with later insertions. A lecture entitled “From Baghdad to Bethel: A Holy Legacy” was given by  Scott Carroll, Ph.D., Director, Sr. Research Scholar, Manuscript Research Group. See among others: https://www.bethel.edu/events/torah-dedication and https://www.bethel.edu/news/clarion/articles/2014/April/bethel-torah

2) 4 September 2014, Multnomah University, Portland Oregon. According to the University blog, “Ken and Barbara Larson, from Bonita Springs, Fla., are giving a rare and valuable Torah to Multnomah University.” They are said to be assisted by Ancient Asset Investment. A dedication ceremony has taken place at the beginning of this month:

According to the report, Scott Carroll gave a speech in this occasion: “The 89-foot scroll,” Carroll said, “was composed somewhere in Eastern Europe during the Reformation…If this Torah could talk to us, imagine what it could say and what it’s seen,” said Carroll. “It was preserved through the Enlightenment and the Holocaust. Through a wonderful turn of Providence, it’s in your community now.”

An interesting online article (Donald Libenson, in Capital Gazette, 21 October 2014) is shedding some light on the motivations behind Mr Larson’s donation. It explains that Mr Larson “credited a friend who’s an author and speaker with inspiring the gift. Larson described him as ‘an apologist,’ a defender of Christianity based on historical evidence and other philosophical arguments. ‘He told me he had purchased an ancient Torah and he found it to be helpful in his speaking and teaching. Most people have never seen a Torah. (For each Torah we’ve donated) I have asked the faculty if they’ve ever read from one or touched one, and the answer was no.’ ” Later in the story we have also a report on the evaluation of the scroll: “it has been valued at more than $400,000”.

4) 30 September 2014: The Master’s Seminary, Sun Valley CA. The Facebook page of the Seminary reports on October 1: “Yesterday The Master’s Seminary was given a Torah Scroll by Ken and Barbara Larson of Minneapolis. The scroll, originally crafted in the 18th century in Yemen is a unified work (not a combination of various scrolls merged into one).” A picture with Scott Carroll and the Larson is posted too. A recent donation of a 17th century Torah Scroll is recalled also on the Seminary’s Wikipedia page: http://en.wikipedia.org/wiki/The_Master’s_Seminary

5) 8 November 2014: Veritas Evangelical Seminar, Santa Ana CA. “In the presence of 1500 attendees at its annual National Apologetics Conference, Veritas Evangelical Seminary  received and dedicated a rare Hebrew Torah scroll. The donors, Ken and Barbara Larson, are passionate about Israel and the Bible, visiting the archaeologically rich nation four times.”The source is an article on Christian News Wire (1 December 2014). The donation is also announced on Twitter.

The scroll is paid for by Barbara and Ken Larson, as we learn from the presentation ceremony posted online:

Here Carroll explains that the scroll most ancient portions date to the “late 1600 early 1700”. A section comes from Spain, but the scroll in the current shape seems to be from Morocco. Although the details remain vague – as always with our Indiana Scott – Carroll says that the Torah was brought to Israel by people constraint to leave their countries and once there it passed to local collectors with whom “they” – I guess he and Hillard ­– collaborate. In this way the manuscript went to the Larson, who are then introduced.

7) February 2015: Trinity Western University, Langley Canada. As reported in a local newspaper online: “A 450-year-old Torah scroll recently gifted to Trinity Western University (TWU) by donors Kenneth and Barbara Larson will give students access to an original Hebrew manuscript originating from Morocco. The 16th century scroll was presented by the Larson to mark their 50th wedding anniversary. The donation of the Torah was paired with funds for a Torah room in TWU’s Alloway Library.” The donation is also reported in the University webpage.

In conclusion, so far I have been able to count 7 Torah scrolls donated by Ken and Barbara Larson through the agency of Scott Carroll and Ancient Asset Investment to Christian education institutions in a short turn of time. Some of the stories attached to the scrolls look terribly similar, but it is impossible to verify details unless the institutions that have received these gifts will decide to check and enquire further. If I may, I warmly recommend them to do these checks because if Scott Carroll’s knowledge of Torah scrolls pairs his knowledge of papyri, I see problems coming.

It would be interesting, among other things, to know how much the Larson have paid for the scrolls, and how much they have declared their value for in tax returns.

There are of course all the other issues related to collection and acquisition history of these scrolls, export licenses, and so forth so on besides ethical questions regarding the Jewish history of these objects, in some cases even their connection to the Holocaust. It may be all perfectly legal. But I leave the reader to think about this story and to decide if all this sounds ethical.

I personally do not need the law or academic associations policies in order to decide for myself. 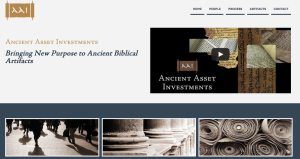 As I pointed out in previous posts, papyri and more in general ancient manuscripts have become very popular among North American Christian apologists and I have found another interesting prove of what is happening.

Ancient Asset Investment is a firm which aims at bringing together collectors who wish to sell their artefacts and potential purchasers. The business website explains the process in simple and clear terms; this is a world where everybody is nice and have good manners, according to a terminology where prices are never mentioned, only values.

Those who sell, defined as clients, “have the unique opportunity to leverage the value of ancient artifacts to the greatest advantage, be it personal or financial”. Purchasers are not normal collectors, but “guardians” who “share irreplaceable antiquities with the world while protecting them for future generations.” The firm provides access to scholars who can provide “research” and “appraisals“: and guess who are these scholars? Of course the Manuscript Research Group (MRG) that as you already know is the creation of my myth: Scott Carroll.

“AAI has an exclusive business relationship with Scott Carroll Manuscripts and Rare Books. Dr. Carroll is a leading expert with unparalleled access to undocumented and unidentified artifacts in the overseas markets”

Among other things, an interesting YouTube presentation is mentioning “street-level foreign sources” for acquisitions. This sounds intriguing (or sinister, depending on your point of view on the matter).

As for the “guardian” model, this is another high profile character of my blog: Josh McDowell.

Yes, we have reached a new level….

Josh McDowell as a testimony for AAI – screenshot from AAI website