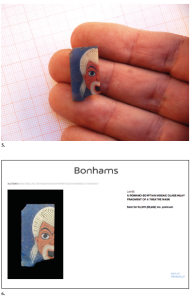 The glass inlay recovered from Bonhams

The last issue of the Italian academic journal Analecta Papyrologica publishes an interesting report on episodes of illegal excavations and looting in the area of Antinoupolis (“Latrones: furti e recuperi da Antinoupolis”, Analecta Papyrologica XXVI 2014 pp. 359-402). Rosario Pintaudi, director of a long-running archaeological mission on the site, and his collaborators document robberies and plundering, but also some recoveries of objects, in the area since the outbreak of the Arab Spring in 2011. Some papyri, inscriptions and other pieces were recovered locally, but the most significant event reported is the recovery of an early Roman glass inlay stolen from the excavation site and later found on sale in an auction catalogue. This little and beautiful piece traveled from Egypt to the showrooms of Bonhams in London, where the sale was stopped by the police, after the object sold for about £ 5,000.

There are two important points emerging from the article. Firstly the searching of antiquities involves Egyptian local communities due to both the serious political and economic crisis, which makes life very hard for people, and the awareness that there is a flourishing and easily approachable market for these objects. It must be underlined that the core of the market is in Europe and elsewhere: as always the real money are made outside Egypt that remains a source, exploited country. Secondly, Pintaudi alerts the scholarly community on the sudden, recent appearance on the cultural scene of new big collections and a number of important, recently published papyri in the hands of anonymous collectors. Obviously there is no final proof that these two facts are directly linked to the situation in Egypt, but the Bonhams episode demonstrates that there is an absolute need for collectors and academics to be extremely careful when acquiring and publishing new texts and objects. As often happens, in the auction catalogue provenance was recorded as “English private collection, acquired in the late 1960s.” I wonder on the basis of which documents.

Bonhams catalogue entries for lot 64 and 65. The fish is remarkably similar to the glass inlay from Antinoupolis.

I am trying to retrieve information on this fragment: have you ever seen it? If so, let me know.