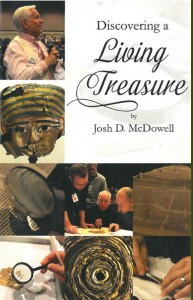 Evangelical apologist Josh McDowell has uploaded new interesting material on his  “Discover” webpage. There is now a link for downloading an enlightening pdf booklet, Discovering a Living Treasure, in which he explains how he started his papyrology training under our Indiana Scott Carroll (I retrieved this information from Brice Jones’ blog). At page 2 of the booklet, McDowell says that his first dismounting mummy mask experience took place at Baylor and the papyri were extracted for the Green Collection by Carroll: if this is true, images and explanations of the extraction method will be certainly published in the first volume of the Brill series.

McDowell adds that he has then purchased cartonnage through Scott Carroll for starting his own collection to use for his ministry. I recognise that Scott Carroll must be a terrific teacher because McDowell has very clear ideas on cartonnage, and is able to distinguish mummy masks, panels, and book-binding (p. 4), a topic that has recently confused even well-trained people. Despite the promising cartonnage lesson, what follows are some (hilarious) out of focus images of papyrus and parchment fragments allegedly bearing lines form the Scriptures, and this I must say is not very promising in terms of credibility.

I am not a law expert, but it appears that in the United States owners of antiquities are entitled to do whatever they like with them, including dissolving mummy masks in Palmolive soap, as long as they have been legally acquired. However, in case the ownership is later discovered to be illegal the legal owner (e.g. the Egyptian government) in principle could ask for restitution and damages.

Can we see the acquisition documents of antiquities owned by Josh McDowell and other private collectors as I have already asked in my yesterday post? Would you trust people who dismount cartonnage and then refuse to explain from where the original artefacts came from?

The so-called Jesus’s wife papyrus and the acquisition history documents produced by the anonymous collector are now considered to be fake.

What follows are the ‘following thoughts’ on issues of provenance that I promised in my last post. They are based on recent discussions that took place in Manchester and in San Diego (Annual Meeting of the Society of Biblical Literature). The point of view is that of someone particularly concerned with papyri and Egypt, but I think these are wider, more general issues on which I hope to hear reactions and comments in my blog and elsewhere. In line with the practical aim of finding ways forward, I will proceed in sections and conclude each of them with a ‘way forward rule’ that I believe those involved with ancient objects (academics, curators, dealers, collectors, etc.) should follow. This is the first of a series of posts.

In presenting the results of research to peers and the public, academics use means of communication and follow rules that are centred on the values of trust and accountability. Good arguments in any scholarly discussion are based on a method that provides sources and data that not only proves the points, but is also reliable and verifiable. So, for instance, if a scholar relies on a passage from an ancient author, that passage is cited in order for others to follow the argument, to check and verify the source, and finally to agree or disagree. That is how scholarship functions.

For those who work with artefacts reliability and access to as many details as possible related to the ancient sources under scrutiny, often published for the first time, is particularly important. Images and other key-information are provided, including a clear discussion of the archaeological provenance and acquisition history of the object in question. In the case of papyrus editions, this has become the norm. A great amount of papyri arrived in European and North American collections in a period when not much attention to this information was paid. As a result, there are cases in which we do not have precise records on the finding, purchase, and following arrival of such papyrus in a certain collection: on these occasions editors discuss the situation openly, explaining the reasons why we lack records on what has happened.

Why is it important to include provenance in papyrus editions? Because information on acquisition history is at the basis of museum archaeology, i.e. a method of excavating in library and museum archives that allows scholars to reconstruct the ancient provenience of a text, and in some cases to reconstruct ancient archives. It allows fragments in different modern collections to be merged, and sometimes it helps establishing archaeological contexts otherwise lost.

The lack of discussion on provenance, including acquisition history, is bad practice, and it is usually criticised by academics because it deprives the readers of important data for verifying the reliability of the arguments made in publications. It also goes against one of the principles of our profession, the advancement of scholarship and knowledge, because it denies the possibility to open (or exclude) further research on the above-mentioned manuscript’s history and connections.

Besides all this, to avoid discussion of provenance undermines trust: would you trust someone who conceals information? Trust is an important issue that has surfaced in many of the papers, comments and conversations we have had so far. David Trobisch, director of the Green collection, for instance, in his comments at the Manchester seminar, and later in his response to my paper in San Diego, has explained to us that trust is at the basis of the relationship between antiquities dealers and purchasers. And I understand why: obviously, you must trust who is selling you objects that cost a fortune and the market circulation of which is subject to national and international strict laws. Trobisch has told us that the Green Collection has bought from European private collections – the economic crisis has pushed collectors to sell as the previous director of the collection, Scott Carroll, already explained in a 2012 very interesting video interview – and has operated on the antiquities market through trusted dealers. When I asked Trobisch why not to name these trusted dealers – in particular the one who sold them the very much debated Galatians 2 fragment – as many universities (e.g. Lecce) and private collections (e.g. Schøyen) are now doing even in their websites, he answered that he does not want to cause harm, since dealers have families and risk to lose everything. Why do they risk losing their job? This is a point I did not understand, I must confess. How can a perfectly legal transaction cause harm to dealers’ professions? Quite the opposite, I think. When the Museum of the Bible will open in 2017, I am sure trusted dealers will be proud to see their names on the labels and in catalogues: it will be a well-deserved form of advertisement.

In order to assure the advancement of knowledge and the maintenance of trust among scholars and between them and the wider audience, full discussion of the archaeological finding and acquisition history of ancient artefacts should be given in publications, exhibitions and conference papers; in cases where the information is lacking, there should be an open discussion of the reasons why it is the case.

In order to allow academics to include such basic and important information in their publications, collections and collectors should provide full access to their archive files relating to the two above-mentioned points.

Open access to acquisition records, and their discussion, can become a delicate matter in cases of recent purchases, especially when the objects belong to a private collector and even more so when the collector wishes to remain anonymous. We have had a recent example of the risks academics take when publishing manuscripts in the hands of anonymous collectors with Professor King and the so-called Wife of Jesus fragment. To complicate matters further, there is also the problem that it seems easy to fabricate fake purchase documents as this and other famous cases have shown.

I recommend S. Mackenzie, Going, Going, Gone: Regulating the Market in Illicit Antiquities (Leicester 2005): enlightening reading on the pitfalls of the antiquities market to deal with acquisition history documents among other things. Neil Brodie devoted a paper to The Role of Academics in the trade of unprovenanced antiquities at the Manchester colloquium. You can watch a video where he summarizes his arguments, or read the abstract and access other material from here.

This brings us to the topic I will discuss in my next post, LEGAL/ILLEGAL, LICIT/ILLICIT: LAWS AND ETHICS.